Game of Thrones left a hole when it drew to a close in 2019. And the new show by G.R.R Martin, a prequel to Game of Thrones is set to impress just as its predecessor did. Scheduled to begin on August 21, House of the Dragon is set 300 years prior and follows the Targaryen War. With a while still waiting, here are some recommendations to watch while waiting for the show to drop. 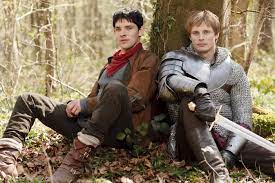 Loosely following the Arthurian legends; A young Merlin travels to Camelot to live, in a time when magic is banned and his people are hunted and killed. As Prince Arthur’s manservant, he must protect both his future King and all of Albion, and help Arthur grow into the man legend says he will be. Charming and funny the five-season show is still popular to this day, ten years after it finished.

Legendary Norse figure Ragnor and his family forge a path through history as they fight, love, and die for their beliefs and the power they hold. Real life and fiction blend in this grimy and at times grim account of Viking life; there is a strong thread of religion, paganism, and Christianity to be exact, which is an important part of the conflicts that lead the Vikings. Completed in 2020 there are six seasons.

The chosen one takes the form of a young woman in this tv show which begins at the start of the Roman invasion of Britain. Following alongside the occupation led by Roman General Aulus Plautius, Britannia spreads its run time between a cast of characters, Roman and Celtic alike. While there is no word yet on season four, Britannia weaves together a tale of magic and true events to create an enchanting and at times funny show, leaving little danger of cancellation.

Set in Renaissance Italy, it follows the Borgia family as their patriarch climbs to the top of the Catholic Church as Pope and the struggles that come along with that level of power. But not everything in The Borgias is centered on religion, and the biggest hint of this is the scandalous, incestuous relationship between Cesare and Lucrezia Borgia, children of the Pope. Based on the real family, The Borgias ‘ three-season run time packs in a lot of historical accuracies as well as inaccuracy; and flaunts one of history’s most notorious crime families.

Or if none of these are your cup of tea, you could always re-watch Game of Thrones, but maybe skip the last season. Check out these articles for more information on House of the Dragon or Vikings.