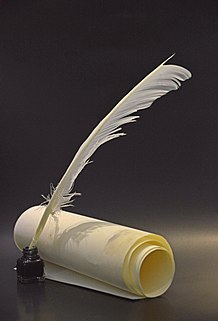 This is made from the molted flight feather of a large bird; they were used for writing before the invention of the dip pen. A quill has no internal reservoir and therefore needs to be dipped in an inkwell; it is rarely used as a writing tool anymore because modern paper can quickly wear a quill down.

A stylus is a form of writing utensil. It is generally in the form of a narrow, elongated staff; it is often curved for easier holding it has been used since ancient times when they were commonly made of reeds. Today, they are used for things like writing on digital tablets as well as artistic uses like hand embossing and engraving.

These are paintbrushes that are used for Chinese calligraphy; they are also used in Japan, Korea, and Vietnam. The ink brush was invented around 500 BC; it is one of the Chinese Four Treasures of the Study, together with the inkstone, inkstick, and Xuan paper. 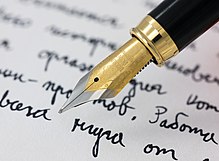 This writing implement uses a metal nib to apply ink to paper; unlike earlier pens, this pen uses an internal reservoir. These reservoirs can be filled via manual filling or an internal filling mechanism; another popular option is pre-filled ink cartridges. 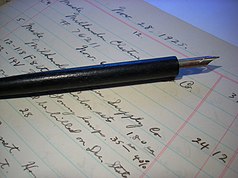 A dip pen uses a nib in a handle for writing; the ink is usually by dipping it in an ink bowl or bottle. The nib is usually made of metal, while the handle or holder can be made from materials like bone, metal, plastic, or glass.