As discussed in my article yesterday, there are many sub-genres of dark tourism, one of which is grave tourism. Grave tourism is the visiting of cemeteries of any kind, for various reasons. There are many different types of cemeteries and graves; one such type is the catacomb or man-made subterranean burial place.

Many cities around the world have catacombs, and one such city is Rome, Italy; these are some of its catacombs.

Catacombs of Marcellinus and Peter 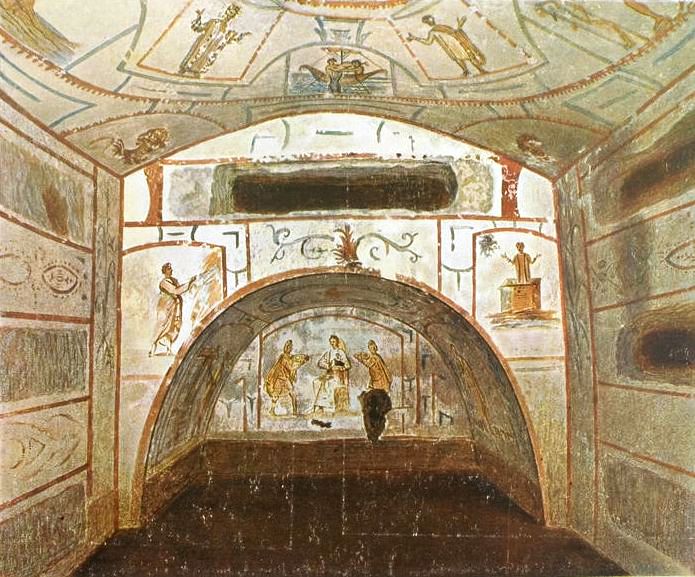 These catacombs were named after the martyrs Marcellinus and Peter, who legend says were buried there. These catacombs cover three hectares and have three different levels of galleries totaling 4.5 kilometers. Notable features of these catacombs include a variety of both pagan and Christian frescoes, as well as numerous small artifacts found alongside the thousands of skeletons.

This catacomb is in Rome’s Via Aurelia; it is named after the martyr Pancras of Phrygia. He was martyred and interred in the early 4th century AD; a basilica was subsequently built above the catacomb between the 4th and 5th centuries. The catacomb is divided into three main regions, now largely ruined. Additional burials there include a man named Botrys, a saint named Felix, and a saint named Sophia, who is buried together with her three daughters.

The Catacomb of Pontian is located on Rome’s Via Portuensis; it contains two papal tombs, those of Anastasius I and Innocent I. Additional burials include Saints Abdon, Sennan, and Quirinus, among others; the catacomb itself is named after an unknown 3rd-century martyr. 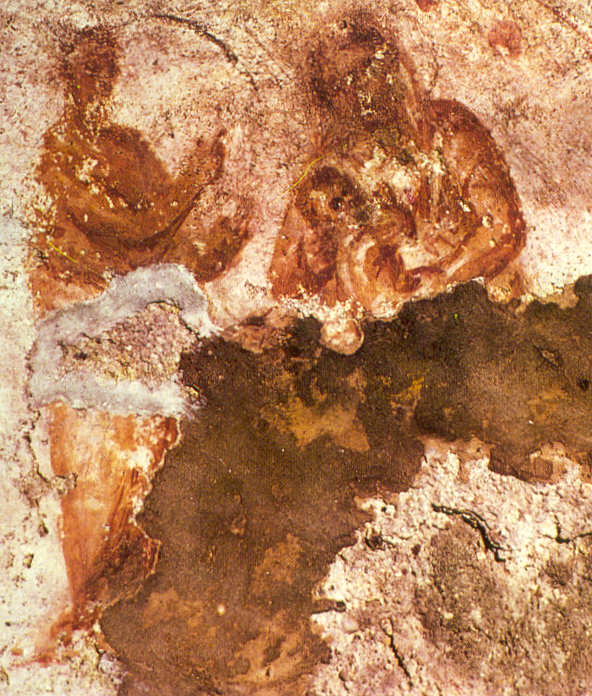 This catacomb is in Rome’s Via Salaria in a former quarry. It was used for burials from the 2nd to the 4th centuries and is supposedly named after the wife of a Roman consul. There are various paintings in this catacomb, including the oldest known Marian paintings. Burials here include seven early popes as well as many martyrs.

This catacomb is named after Saint Calepodius, a martyred priest who was buried there; other burials include Popes Callixtus I and Julius I.

These catacombs are located on Rome’s Appian Way; they are part of an ancient funerary complex covering a total of 30 hectares. Burials here include several popes and saints, among them Saint Cecilia, Saint Gaius, and Pope Damasus I. Notable features of these catacombs include 3rd-century frescoes, a child’s sarcophagus sculpted with biblical episodes, and splendid paintings.

This catacomb is located near Rome’s Via Ostiense and was constructed in the 4th century; it lies along with the current Via Silvia D’Amico. It is a re-use of an old pagan necropolis and contains both frescoes and mosaic pavements. 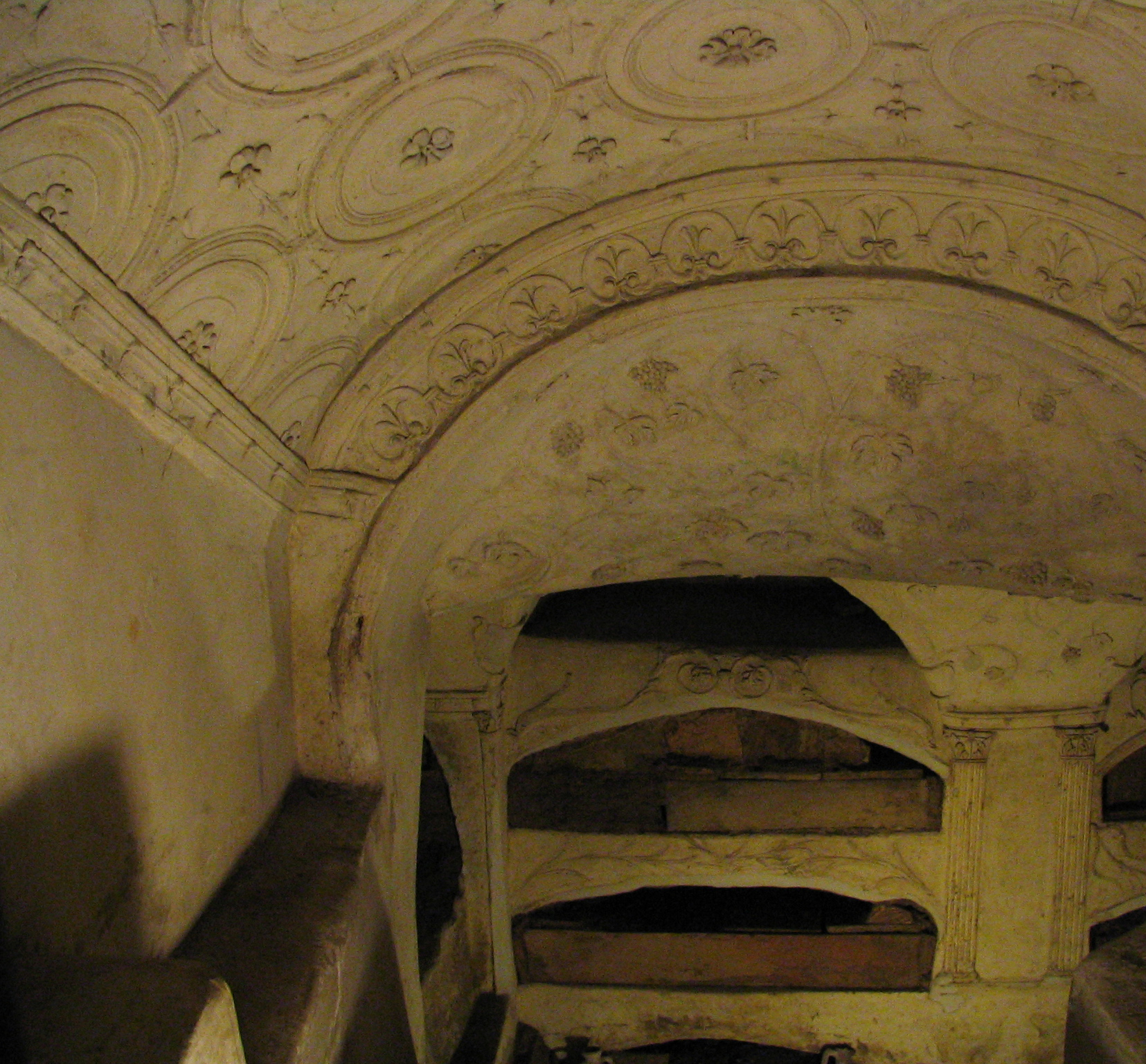 The Catacombs of San Sebastiano are in Rome’s Ardeatino Quarter; the first of its former four floors is nearly destroyed. There are at least three martyrs buried here: Sebastian, Quirinus, and Eutychius; relics from all three martyrs were located there and have since been moved to above-ground chapels. Various parts of the catacombs are decorated with detailed frescoes, refined stuccoes, and paintings.

These catacombs are in the modern Pinciano neighborhood of Rome. The archaeologist who first discovered the tomb entered what he thought was a cellar but turned out to be a grave covered with pictures. Nowadays, hardly anything remains of the catacombs, due primarily to a flood in 1986.

This Catacomb of Generosa is in Rome’s Portuense Quarter; its name comes from the name of the patron of the land on which the catacomb complex is located. It contains the graves of four martyrs, Simplicius, Faustinus, Beatrix, and Rufinianus; it is decorated with a fresco known as the “Coronatio Martyrum.” 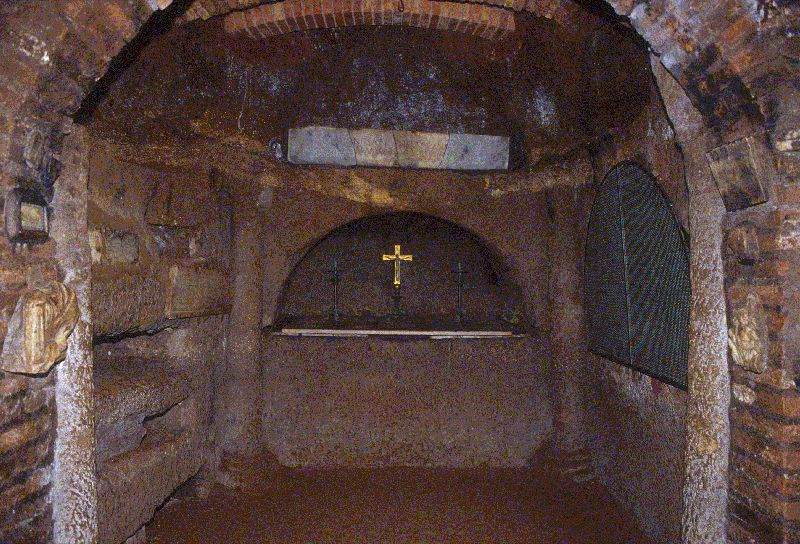 Other catacombs in Rome include the Christian catacombs of Commodilla, Praetextatus, San Lorenzo, and Via Anapo, as well as the Jewish catacombs of Vigna Randanini and Villa Torlonia.