Used for many different parts of a meal and most popular as a dessert item, pudding as a dish has a world of iterations.

This rare, rich pudding originates in Sweden and looks like a simple milk pudding; however, it is anything but. The Swedes like their dairy products fresh, and there is nothing fresher than what is used in this pudding: colostrum, or mother’s milk. To make the pudding, the colostrum is mixed with sugar as well as regular milk or water, then cooked until thickened; chefs are advised to keep a close eye on the mixture. One recipe used for this pudding says that cooking time depends on the breed of cow and how soon after birth the milk is produced. 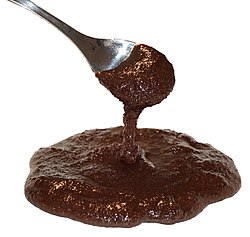 Finnish Christians’ Lenten fasting was often limited by slim spring pickings; one reliable staple that remained was rye. At its most basic, this pudding is made by cooking rye and water; the pudding is sweetened naturally through malting.

Danish tradition says that people leave a bowl of this rice pudding out as an offering to appease a mischievous elf; otherwise, the elf might steal or even harm livestock. Nowadays, the pudding is dished up with ingredients like vanilla, whipped cream, chopped almonds, and warm cherry sauce.

Originating in Derbyshire, England, this pudding was supposedly created when a cook mistakenly spread the egg-and-almond paste on top of a pastry base rather than mixing it in. Whatever its origin, the pudding itself is essentially a puff pastry with a jam base overlaid with a ground almond & egg filling.

This pudding is a Route 66 classic; its home is Pops, a restaurant and gas station in Arcadia, Oklahoma. Their claim-to-fame pudding is a hot slice of not-to-sweet, yeasty pudding with plump raisins doused in house-made root beer and white chocolate sauces.

The unusual ingredient in this pudding, carrageen, is a species of seaweed; Gaelic for “little rock” or “moss of the rock”, carrageen is a delicacy in its native Ireland. To prepare this pudding, chefs simmer the briny, almost spicy-flavored carrageen with milk and vanilla until the moss forces out a thick jelly, then strain the mixture onto a beaten egg yolk to make a custard, which is then combined with beaten egg whites and cooled into set.