The day before Ash Wednesday is celebrated in many different ways; after all, it is the last chance to indulge before the start of the Lenten season. Evens like New Orleans Mardi Gras and Brazilian Carnival are well-known; however, there are many more traditions worldwide that celebrate this day. 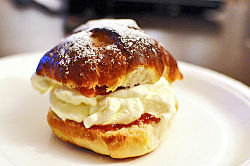 In Norway, Fat Tuesday, or Fetetirsdag, is marked by filling oneself with a strong diet; this includes eating dishes such as salted meat and turnip puree. Another tradition is to eat flour foods such as Shrovetide buns.

In this tradition, the day is known as Fat Tuesday, White Tuesday, and Lent Tuesday. Tradition says that buns or rolls are eaten on this day; in Sweden, the buns are eaten with whipped cream and an almond paste filling. Another Fat Tuesday tradition is going out on Fat Tuesday; in one municipality, children walk around to different farms begging for sweets.

In Hungary, this day is known as Meat Tuesday, as it marks the last day meat can be consumed before the Lenten fast. Traditions include ‘masquerade’, which entails children putting on homemade costumes and walking around to village houses, where they receive small gifts, candy, sweets, and money. In the evenings, the adults are the ones who get dressed up. They cover their faces and go out to inns and pubs, where they try to figure out who’s under the masks by asking questions over drinks.

In Lithuania, this holiday is called Užgavėnės, or “the time before Lent.” It begins on the night before Ash Wednesday; that night, an effigy symbolizing winter is burnt. Another major element is the battle between the personifications of winter and spring; this is meant to symbolize the defeat of winter in the Northern Hemisphere. Joyful and frightening costumed characters appear during these celebrations; participants also consume the traditional holiday dish of pancakes with a variety of toppings.

The Carnival of Madeira is a celebration that ends on Shrove Tuesday, the day before Lent. There are two main parades during this carnival. People in Madeira also traditionally consume Malasadas on Shrove Tuesday; the reason for making Malasadas was to use up the rich ingredients in the house, in preparation for Lent.

This Northern European carnival tradition of Fastelavn involves a lot of elements. Cat In A Barrel is similar to a pinata; it involves hitting a wooden barrel full of candies and oranges until the barrel breaks and the candy spills out. Participants keep hitting the barrel until the barrel is smashed; the person who knocks down the last piece of the barrel becomes “king of cats.” Other traditions include processions that gather money for celebrations, as well as Shrovetide rods, where children will use decorated “rods” to symbolically flog their parents to wake them up.