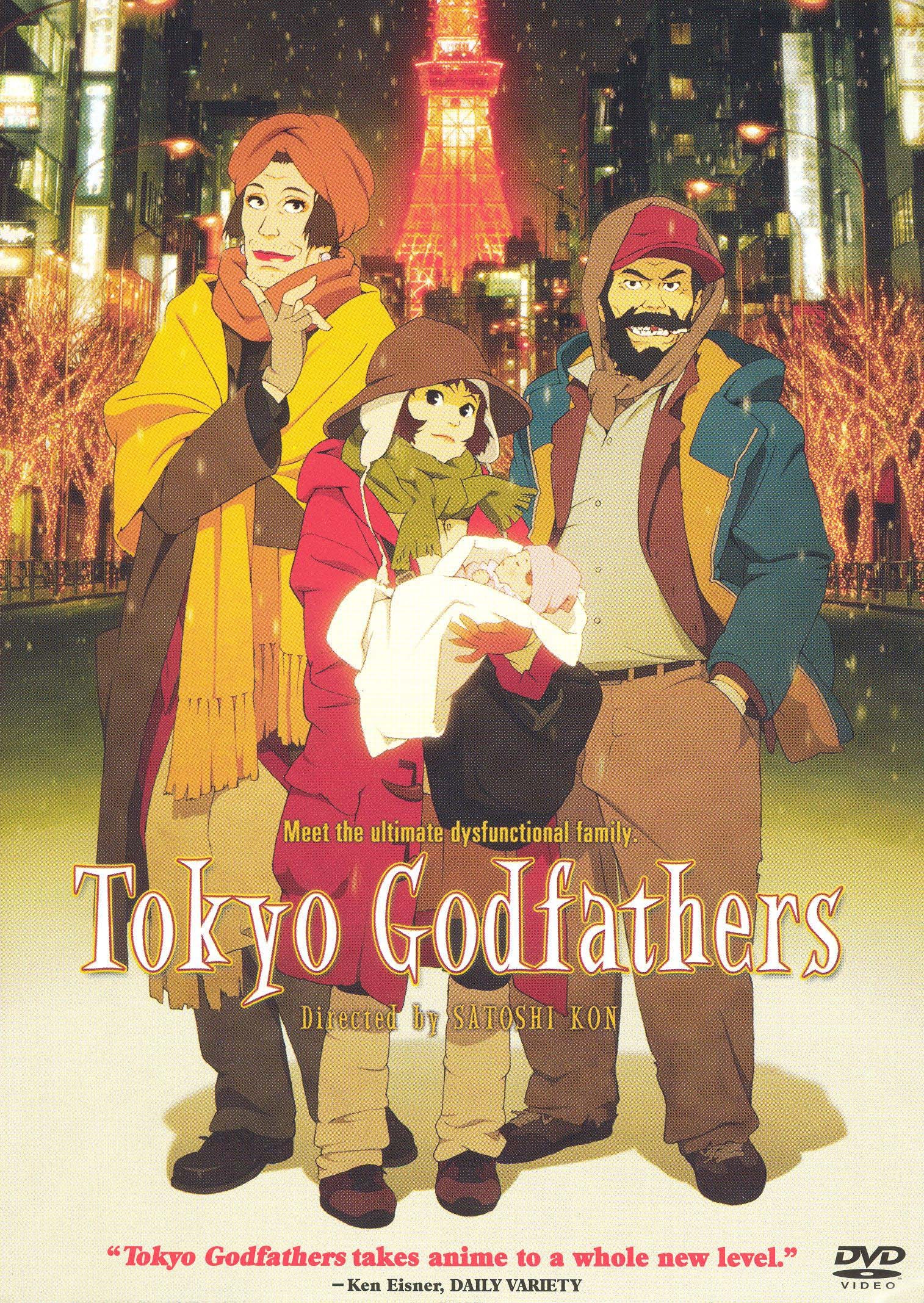 “Tokyo Godfathers” is an anime written and directed by Satoshi Kon. This 92 minutes long anime was released on November 8, 2003, and was produced by Madhouse.

This is a story about three homeless people, Miyuki a runaway high schooler, Gin an alcoholic man, and Hana, an ex- drag queen transgender who went on a journey to find the mother of a lost baby who they found crying in a pile of garbage with some fun.

The story begins with Hanna, Gin, and Miyuki in a children’s nativity performance on Christmas Eve. After the event ends, Hana takes Gin and Miyuki to retrieve Miyuki’s present that she hid in a dumpster. Gin and Miyuki were arguing until they heard a voice and approached it. They were surprised because that voice belonged to a baby among the garbage. Hana decided that she would be the child’s mother and even named her Kiyoko, but Gin told her that they needed to find the baby’s mother and return her. Not long after that, they found a baby bag filled with baby goods, a photo of a couple, a club, and a key.

They take Kiyoko into their tent, and Hana request Miyuki to run some errands for the baby. Soon Gin opens about his life. He told Hana that he had a daughter, but she fell ill. Unable to find money to pay the medical bills, an unknown man helped Gin get the money by throwing a bicycle race. Gin was found out, and soon his daughter and wife died. This left Gin in grieve for a long time.

The next day, the group went to the train station, where they found the numbers of a locker. When they opened the locker, they found some keys, several business cards, and a club’s phone number. They tried to call the number, but no one answered. They went to board a train until Miyuki went out because she saw her father spilling the baby food on another train. Unable to find Miyuki’s father, they began to walk somewhere until Kiyoko cried because she was hungry. They found an offering of baby supplies in a cemetery. Outside the graveyard, they saw a yakuza man trapped under his car. They helped him, and he then asked them what he could do to thank them. They showed the club’s card, and the yakuza man took them there. Coincidentally, his daughter, whose name is also Kiyoko, is marrying the club’s owner. The groom knew who the baby’s mother was and gave them her address. They were about to go to Sachiko, the baby’s mother but were interrupted by a hitman disguised as a waiter that attempted to kill the yakuza man. The hitman kidnaped Miyuki and Kiyoko as hostages and took them to his house. Miyuki then talked with the wife and opened up about running away from her family.

At the same time as the kidnapping, Hana searched for Miyuki and Kiyoko while Gin took care of an older man dying. When the man passed away, Gin noticed a picture of the same building from the picture of Kiyoko’s parents. Some teenagers then show up and beat up Gin along with the deceased man. Despite being wounded, Gin stood up to find Hana and the girls. Hana, Miyuki, and Kiyoko went to Angel Tower, a bar where Hana used to work. They met Gin, who a worker saved at the bar. Soon after, they went to Sachiko’s house, only to find that it had been demolished. They found out from a neighbor that Sachiko and her husband fought a lot. They went into debt because of her husband’s alcohol and gambling habits and were forced to leave the house. They went to rest in a shop for a while but got into a fight with a drunk man. An ambulance hit Hana, and she coughs out blood. Miyuki and Gin rush her to the hospital. This is where the truths of who baby Kiyoko was revealed.

This is one of the anime that made me emotional. “Tokyo Godfathers” was slightly different from the movies that Satoshi Kon had ever made. This movie is a comedy and yet touching. I really liked how this movie was portrayed in Japan’s late 90’s era. I suggest you guys watch this anime movie if you want to watch some emotional animes.

Hello there! I'm Raifa. Due to my limited experience, I would try my best to write a good articles.